Most ant pest species found in Victoria are advanced social insects, with each insect given an allotted role in the colony: queen, king, worker, or winged reproductive. Ants live in permanent colony nests in a variety of habitats, including in soil and timber, under pavers, inside wall cavities and within roof void spaces of buildings. They can travel large distances in search of food, and cleanliness isn’t necessarily a deterrent, as even very clean kitchens and pantries can provide a ready food source for these insects.

Ants can be a nuisance pest, with some species even inflicting a painful bite. However, most only become troublesome when they infest pantries, kitchens and BBQ areas in large numbers. At this point, you will need to enlist professionals such as RIP to provide effective ant control with pesticides and baits. 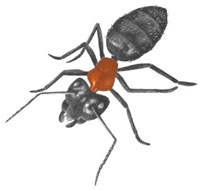 As there is such a wide range of ant species, it’s vital to indentify which one you’re dealing with before you can implement an elimination program. For example, the location of the nest can have a large impact on the method of ant control that will be most effective – baits or pesticides – as there are different approaches depending on whether the ants are in the ground or in your roof void or wall cavity.

In cases where ants are nesting inside a wall cavity, around electrical junction boxes or in the roof void spaces of your home or commercial building, RIP will apply professional strength Permethrin dust. Though this substance is extremely effective when practicing ant control, it is of extremely low toxicity to humans, dogs, cats and other mammals – in fact, as a natural extract of the pyrethrum plant, it is less toxic than table salt.

Locating the colony nest is not always possible, as ants can be very good at nesting in concealed locations. However, when the ant nest can be located, a Pyrethroid liquid insecticide spray can be used directly in the burrow and the colony nests, ensuring effective ant eradication.

For situations where the ant nest is located outside the building, RIP identifies obvious ant nesting sites and trailing areas and applies a combination of ant bait granules and TERMIDOR liquid treatment.

The ant bait granules we use are of the latest technology – a professional product containing an insect growth regulator in a sealed plastic dispenser. The method of dispersal is to place the ant bait near areas which support high ant foraging activity. The worker ants will collect and carry it back to the nest to feed the other ants in the colony.

There are a range of ant baits available, designed to target different species depending on whether they feed on sugar or protein.

As species identification is essential in deciding the right approach to ant control, we’ve included the below section, detailing common ant species in Victoria and Melbourne.

The colonies of these ants often contain many satellite nesting sites spread over a wide area. They can also be found underground as well as inside buildings. When indoors, they prefer wall cavities, roof voids, architraves and fireplaces; they have even been known to infest (and short-circuit) air conditioners.

Overall, the colonies of these ants can contain several million workers and many queens. The worker, the most likely colony member to be found foraging in your house, is approximately 2.7mm in length, with a black body and yellow feet. They are a sweet-toothed species, preferring sweet foods such as sugar and soft drinks.

The odorous house ant is approximately 2 to 3 mm in length, and is black to brown in colour. Its distinctive name comes from the fact that if crushed, it has a distinct rotten odour. Being able to recognise this one is very helpful!

The colonies of this species can contain more than 10,000 workers and several reproductive queens that can establish subsidiary colonies. Nest sites are commonly found outdoors, in the soil and under the base of trees. If located in the soil, nests are usually shallow and situated under a stone, pavers or other flat objects.

However, these ants can also be attracted to spaces under buildings and inside wall cavities, particularly those with a regular source of moisture. Faulty plumbing, a leaking shower recess, broken guttering and roof tiles can all create conditions that may attract odorous house ants.

The workers of these ants are of course brown in colour, and are approximately 2 to 3 mm in length. Nesting sites are found both indoors and outdoors, within wall cavities, garden beds and sub-floor areas.

These ants can vary in colour, from black through to dark brown and a brownish orange. Workers are approximately 6 to 12 mm in length and can travel long distances in search of food.

Carpenter ants are named for their practice of excavating their nests in wood and creating smooth tunnels and galleries. Their colonies may exceed 100,000 workers, with multiple queens and satellite nesting sites.

Though these ants prefer to nest outside, building in the soil and piles of twigs and branches, they can sometimes infest and damage timbers in buildings, especially those that have problems with moist wood.

Bulldog ants are about 10 to 20mm in length, with long bodies that make them easy to identify. They prefer to nest in garden or forest areas, so they don’t tend to infest buildings. However, they are named for their nasty and painful bite, so can be a nuisance to have in your garden. If you see them, leave them alone and contact RIP.

THE COST OF RIP ANT CONTROL IN MELBOURNE

The cost of ant control from RIP varies depending on a range of factors, including:

The period of the service warranty may also vary due to these factors, as well as the presence of environmental factors that may make a re-infestation more likely.

Call RIP today on 1300 371 708 for a FREE quotation that’s customised to your particular circumstances.

Be wary – when it comes to ant control, cheapest is not always best. Cheaper pesticides are solvent based, less effective and can be harmful to those who suffer from asthmatic or other bronchial ailments.

You should always select a pest controller with professional and up-to-date knowledge of ant pest species and ant control pesticides to ensure eradication is carried out both effectively and safely.