Funnel-Web spiders: aggressive by nature - can be deadly

The male funnel-web spider will leave it’s burrow and wander off during hot humid nights, looking for a mate. At this time it is known to enter homes, lodge in footwear, clothing and swimming pools, where they can survive several days under water. The male funnel-web spider is highly aggressive when disturbed or cornered and is able to inflict multiple bites, with its “flick-knife” hardened fangs.

Anti-venom is available in most major hospitals and ambulance vehicles in “funnel-web country”. If bitten, you should apply first aid and ambulance should be called immediately.

The male funnel-web spider is about 25 mm and the female about 30 mm in body length. They are shiny black in colour, with a dark purplish brown abdomen and with a covering of reddish hairs. Unique identification markings include it’s long spinnerets, that is, the two appendages on the end of the abdomen. 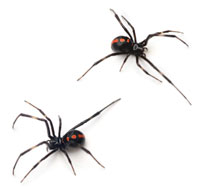 Only a small amount of venom can cause serious illness, as the poison attacks the nervous system. Systemic envenomisation usually results in headache, nausea, vomiting, abdominal pain, pyrexia, hypertension and in severe cases, paralysis. The pain around the spider bite area can be excruciating. If bitten, immediately apply first aid and call for an ambulance.

The red-back spider size varies greatly. The male can be tiny, with the abdomen of the female growing to the size of a large pea. Red-back spiders do NOT always have a “red” marking.

The red-back spider prefers dry habitats; is often found in out-houses, letter-boxes, underside of seats, in rubbish, such as empty cans, in the sub-floor and other dark areas. Electric lights attract their prey, such as moths, flies, mosquitoes and other insects.

The white-tail spider is commonly found in Melbourne and across the state of Victoria. The bite of a white-tail spider may cause nausea and burning pain followed by swelling and itchiness around the site of the bite. In rare cases, a severe allergic reaction, blistering or ulceration of the skin, may be caused by a white-tail spider bite. Immediate medical attention should be sought, if bitten, when any adverse health effects are observed.

The adult white-tail spider adult varies in size from 12 to 20 mm in body length; is grey to black in colour with a white section on the end of it’s tail.

The white-tail spider prefers cool moist locations and is commonly found in garden mulch areas. In summer, it often wanders into buildings, particularly bathrooms, to escape the heat.

The mouse spider can occur in Melbourne and across the state of Victoria. The mouse spider is known to cause severe illness, especially to young children. Although normally not aggressive, the male mouse spider will bite if provoked, and should be considered dangerous to humans. The mouse spider has large hard fangs which can cause a deep painful bite. If bitten, immediately apply first aid and call for an ambulance.

The black house spider can occasionally be found in Melbourne and across the state of Victoria. The bite of the black house spider is poisonous but not lethal. Some people report severe pain around the bite site, heavy sweating, muscular pains, vomiting, headaches and giddiness. If bitten, immediately apply first aid and call for an ambulance.

The adult black house spider spins a lacy, messy web and are up to 15 mm in body length and of a dark brown to black velvet textured appearance. The black house spider prefers dry habitat areas and secluded locations, and is commonly found in window framing, under eaves, gutters, in brickwork, sheds, toilets and among rocks and bark. Electric lights attract their main food source of moths, flies, mosquitoes and other insects.

The wolf spider can occur in Melbourne and across the state of Victoria. The bite of the wolf spider is poisonous but not lethal. Although non-aggressive, they will bite if provoked and should be considered dangerous to humans. The bite may be very painful. Immediately apply first aid and call for an ambulance, particularly as to children or the elderly.

The adult wolf spider is 15 mm to 30 mm in body length; of mottled grey to brown in colour, with a distinct Union Jack impression on it’s back. The female wolf spider carries it’s young on it’s back. The Wolf spider is a ground dweller, with a burrow retreat. This spider has a roving nocturnal lifestyle to hunt their prey and can move very rapidly when disturbed. Commonly found around the home, in garden areas with a silk lined burrow, sometimes with a lid or covered by leaf litter or grass woven with silk as a little fence around the rim of the burrow.

The wolf spider can occur in Melbourne and across Victoria. The bite of the trap-door spider is of low risk (mildly toxic) to humans. It is a usually timid and non-aggressive spider but may stand up and present it’s fangs if harassed. Rarely bites but when it does it it can be painful.

The adult trap-door spider is about 35 mm in body length; of brown to dark brown in colour; and heavily covered with fine hairs. The trap-door spider is a ground dweller, with a burrow retreat lined with silk of up to 250 mm in depth and around 25 mm in width. The Trap-door spider prefers nesting in drier exposed locations, and may have a wafer-like lid on the burrow entrance.

The adult orb-weaving spiders is about 20 to 30 mm in body length; has a bulbous abdomen; and often has a colorful, dark to light brown pattern. The common golden orb-weaver spider has a purplish bulbous abdomen with fine hairs. Garden orb-weaving spiders are often found in summer in garden areas around the home. They spin a large circular web of two metres or more, often between buildings and shrubs, to snare flying insects, such as flies and mosquitoes.

Adult is 5 to 15 mm in body length, with abdomen striped yellow and brown. The St Andrews Cross Spider usually sits, upside down, in the middle of it’s web forming a cross. This spider is a web-weaver usually found in summer in garden areas around the home. It is considered beneficial as it spins a large web to snare flying insects, such as flies and mosquitoes.

An adult huntsman spider may have a body length of up to 20 mm. It’s total diameter including legs may reach 45 mm. The first 2 pairs of legs are longer than rear two. The huntsman spider is hairy; buff to beige brown in colour, with dark patches. The huntsman spider prefers to live under the flaking bark of trees, under flat rocks and under eaves or within roof spaces of buildings. It often wanders into homes and is found perched on a wall. They are shy, timid spiders able to move sideways at lighting-fast speed.

The cost for Professional Pest Control for Spiders

The cost for professional pest control of spiders depends on spider species, the size of property, the extent of infestation and the ease of access. Service warranty period may vary according to the spider pest species, the extent of the spider infestation - and environmental factors. RIP Termite & Pest Control Services of above ground webbing spiders usually carries a 6 month warranty. Please call RIP Termite & Pest Control Services on 1300 371 708 for a FREE quote or request a FREE quote online.