Subterranean termites or white-ants are a highly destructive timber pest, causing major structural timber damage to both domestic and commercial buildings in Melbourne and regional Victoria. 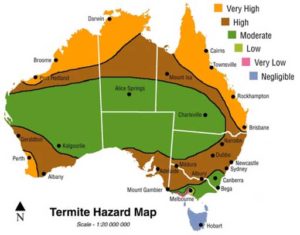 Most homes are at risk in the metropolitan Melbourne area – particularly in built-up urban areas or where well established gum trees are within 100 metres distance of the building.

The termite problem seems to be getting worse: termite damage to Australian homes is on the increase since the removal in 1995 of long lasting soil barrier chemicals; the more common use of softwood building and other landscaping timbers that termites find irresistible, especially timber mulch and railway sleepers. In addition, automatic watering systems, timber landscaping and maintenance, as well as building designs that allow hidden termite entry into the building all promote rapid termite colony development.

NOTE: The standard Home and Building Insurance Policy will NOT cover the repair costs of termite infested structural and decorative timbers.

Australian subterranean termites evolved more than 250 million year ago. They inhabited Australia long before flowering plants. Their survival success depends on living in a protective underground environment. In some species, their colony nest has a hardened shell, exposed above ground level. In most destructive species in Victoria their nest is totally out of sight, below ground level.

Worker termites build mud-tubes over hard objects. The tubes or “galleries” are made up of partly digested timber and mud excrete, and is moist if currently in active use. The termites keep it’s colony nest and galleries at 25 to 35oC with high humidity. If they are exposed to light or open air they will dehydrate and die. Subterranean termites live in constant darkness, excepting for the annual summer swarms of the winged reproductives to set up new nests in the surrounding area.

In some destructive species, a termite colony nest may contain more than a million termites, consisting of a queen, king, young immature nymphs, workers, soldiers and winged reproductives (called alates). Termites are delicate, soft bodied and small in stature, about half the size of match-head, but are highly efficient timber recyclers – nature’s best builders.

The worker termites are blind and forage in a largely random criss-cross fashion looking for new timber food sources. However, they may encounter and follow moisture zones and trail along solid objects, such as a concrete slab edge of your home. The soldiers accompany the workers in their constant search for new timber food sources. If you find termites active in timber framing, it is the soldiers that rush out to defend the workers.

It takes many years of termite control field-work experience to get a proper understanding of the habits of the destructive termite species habits and their likely foraging areas in a variety of building types and environmental circumstances.

Termites are very secretive and will often enter a building through areas inaccessible to inspection, for instance through on-ground patios, cracks or expansion joints or around concrete slab flooring, particularly if the slab edge is obscured by pathways or garden beds. Termites can pass through a crack as small as 2 mm and eat through rubber compound between adjoining concrete slabs. Termites often travel under parquetry and other floor tiles to get to the wall and roofing framing timbers.

Modern termite control products, such as baits, take advantage of the mutual feeding and regular grooming habits of termites as a means to kill the entire colony. Workers termites readily ingest the bait and transfer it back to the colony nest to feed other termites. If sufficient workers ingest the bait and the queen is killed, then the collapse and death of the colony is highly likely. Also, worker termites cannibalise other dead termites, so if those carry the bait in their system, this will further hasten the destruction of the colony.

The biology and behaviour of Subterranean Termites

Termites live in underground nests and travel in mud tubes to protect them from their arch enemy – the ants. Termites descended from the cockroach family, whereas ants descended from the wasp family. However, ants will not protect you from termites: the soldier termites has a hard helmet-style head with large cutting pincers and a frontal pore to squirt sticky latex to ensnare the ants.

The termite colony has a king, queen, winged reproductive (young kings and queens), soldier and worker termites. Each has a different role to perform and all interdependent upon each other for survival of the colony.

Queen termite is an egg laying machine, she can live more than 25 years and produce more that 2,000 eggs a day.

King termite stays by the side of the Queen all his life, locked away in the central nursery chamber and tended to by worker termites.

Worker termites are most numerous in the termite colony. They are usually about 3 to 4 mm long, soft bodied, creamy translucent colour, have no wings, are sterile and blind. Worker termites carry out all work in the nest, including food gathering, building, repairing and maintaining the colony nest structure and foraging tunnel system. Only the workers can digest timber which they regurgitate and feed in liquid form to the queen and other termites in the colony.

Soldier termites commonly have an orange coloured armored head with mandibulate pinchers which they use to crush an attacker, such as ants; some have hard pointed snout which eject a white sticky latex to ensnare their enemies. Soldier termites are often seen in large numbers when an active shelter tubes or damaged timber, is opened. Soldier termites will rush out to guard the opening whilst worker termites repair the breach.

Alates or winged reproductives are commonly seen when they swarm on a hot humid summer evening around dusk, often in their thousands from a large mature colony nest. Unlike the other caste, they have eyes but are, are poor fliers. The hover and are swept along by prevailing winds. When they land, they drop their wings and use a pheromone chemical signal attract a mate to start up a new colony of termites.

Note: If you find swarming termites, it is a sure DANGER sign that a large termite colony nest is close-by, and your home is at high risk of a severe termite infestation. Is so, you should contact us to immediately to assess the situation.

Termites constantly groom and feed each other. A valuable technique for the termite controller is to install and monitor a termite baiting system next to any live activity found in and around the premises where termite foraging is most likely to occur. Subsequent regular inspections indicate the amount of bait consumed and the condition of any termites observed. They may appear sick, exhibit a change of colour to a mottle look, indicating the effect of the termite bait over time.

Termite bait is formulated as an attractive food source to the termites. The bait has a delayed lethal effect, to allow enough time to be transferred to other termites in the colony nest. If the queen is killed, the nest goes into rapid decline leading to the elimination of the entire colony.

Proper identification is essential: some species of subterranean termites prefer to attack living trees and will not eat dry seasoned timbers in a building, whilst others can be are highly destructive to such buildings in a short amount of time. Listed below are some important destructive termite species.

Commonly found throughout Melbourne - particularly in urban areas - under concrete on-ground flooring and in areas where eucalypt gum trees are highly prevalent. Coptotermes acinaciformis are highly destructive to buildings and other timber structures. This is the most widely distributed and destructive timber pest in Austrlia - accounting for more than 70% of the serious damage to buildings. A single colony may consist of more than one million termites. A most voracious timber pest… one to be taken seriously.

Coptotermes acinaciformis are very secretive termite species; they build their nest out of sight, often within the base of eucalyptus or other susceptible trees, or completely under the ground; often within an enclosed patio or under concrete on ground flooring which is ideal for moisture retention, temperature and humidity control within the termite colony’s central nest. Coptotermes acinaciformis can also construct subsidiary termite nests away from the main colony nest. A subsidiary white-ant nest can be contained in a wall cavity of a building where there is a reliable moisture source, for example, from a leaking shower recess or faulty guttering or rusted down pipes.

Commonly found in eastern Victoria, these termites “gouge” the affected timber, especially around nails used in construction. When you first find them, you will often see a major soldier (6mm in body length) and a minor soldier (4mm).

Schedorhinotermes intermedius are highly destructive to buildings and other timber structures. If mostly major (larger) soldiers are sighted, it is most likely a large colony with the potential to cause severe and rapid damage to structural timbers of a building or other timber structures. Schedorhinotermes intermedius commonly build their nest in tree stumps, in the root crown of the living, dead and debilitated trees, under houses or within enclosed patios or other areas where timber has been buried or stored in contact with the soil.

Commonly found throughout the state of Victoria - particularly in urban areas, where buildings are constructed of softwood or oregon timber framing. Coptotermes frenchi can cause severe damage to buildings and other wooden structures. It is common for this species to devour timber framing leaving only a thin veneer. This species is the most shy of the termite species; they will retreat from a location immediately (for the time being) if disturbed.

Commonly found throughout Victoria - particularly in urban areas or where eucalypt gum trees are highly prevalent. Nasutitermes exitiosus are destructive to buildings and other timber structures. Sometimes severe damage may occur, but not so commonly as the other species listed above.

Nasutitermes exitiosus build a mound nest which protrudes 30cm to 75cm above the ground. Control can be as easy as knocking the top off the nest and a follow up insecticide treatment inside the nest.

Commonly found in eastern Victoria - particularly prevalent along the eastern coastline. Coptotermes lacteus attacks stumps, dead trees, timber fences, poles and other timber structures that are in contact with the soil, being softened by weathering or decay. These termites are also known to attack such timber in damp sub-floor areas.

Coptotermes lacteus most often build their nest as a mound up to 2m above ground level, with hard clay walls, so control is easily effected once located by knocking the top off and insecticide treatment of the nest.

Commonly found in eastern Victoria – particularly prevalent in the coastal and mountain regions. Nasutitermes walkeri can be destructive to damp timbers often a serious problem where the sub-floor of a building is damp and ventilation is poor with resulting wood decay or fungal growth.

Nasutitermes walkeri build their nest in trees on the main trunk or in the fork of a large branch.

Heterotermes ferox often build their colony nest next to stumps, logs, or other timber in direct contact with the soil where some wood decay or rotting is prevalent.

Dampwood termites form small independent nests which often attack sick or dead trees, decaying stumps or mould timber in the ground; they are seldom found in dry timbers in buildings.

If You find termites… do NOT disturb them

Termites have acute survival instincts. If shaken up or disturbed, the termites will abandon the area and move other areas in the building. If you find termites in or around your property, it is essential that you do NOT disturb them and promptly contact us to arrange for a professional RIP Termite & Pest inspection. RIP Termite & Pest Control Services Victoria has more than 20 years practical experience in protecting buildings in Melbourne and Victoria from termite infestations. Phone 0499 001 884 to arrange for a RIP Termite & Pest inspection and professional advice on how to best protect your home or business.